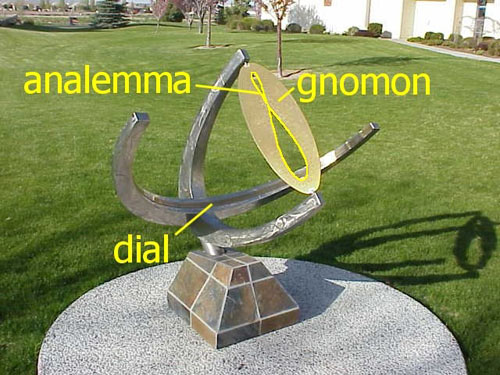 This sundial was a generous gift of the Brizee family. It was designed by Pete Swanstrom for the Herrett Center's exact latitude and longitude. You can read more about Mr. Swanstrom's sundials here.

Earth’s tilted axis and slightly oblong orbit cause the length of the solar day (the time it takes for the Sun to appear to circle us daily due to Earth rotation) to vary through the year. If you noted the Sun’s noontime position for an entire year, it would trace a skinny figure-eight shape in the sky, known as the analemma. Its vertical size is due to the Earth’s tilted axis, which makes the Sun appear to move north (summer) and south (winter). Its width is mostly due to Earth speeding up (winter) and slowing down (summer) in its orbit, but the axial tilt also contributes somewhat to the width. The analemmic gnomon, tilted parallel to Earth’s rotational axis, casts a shadow on the dial (which is parallel to Earth’s equator), thus correcting for the Sun’s seasonal variation and allowing the sundial to read accurate Mountain Standard (or Daylight) Time.