This page was inspired by the release of data from the HIPPARCOS satellite, whose unprecedented astrometric accuracy will undoubtedly change and improve our understanding of the Universe for years to come. At the very least, it has given us a more accurate picture of the distribution of stars in the immediate vicinity of the Sun. The following table gives our current best estimates of the distances to our nearest stellar neighbors in the galaxy.

RANK indicates the order of proximity to the Sun, according to current best measurements.

DISTANCE is given in light years, with the number of significant digits indicative of the accuracy stated in the source catalog.

RANGE gives the minimum and maximum distances of the star according to the standard error of the stated parallax. In cases where the star was not measured directly but is part of a system whose primary was, no range is supplied.

SOURCE indicates the catalog from which parallax data were obtained, either the HIPPARCOS catalog, the Fourth Yale Catalog of Trigonometric Parallaxes, or the Research Consortium on Nearby Stars (RECONS) project. In cases where the star is part of a system where only the primary was observed, the source catalog name is in parentheses. 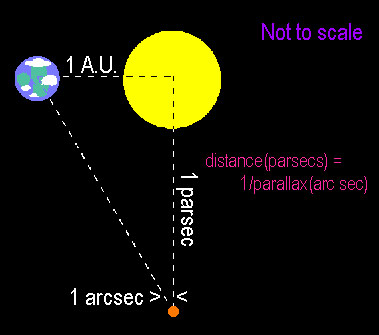 The distances listed in the table above were determined by the method of parallax, illustrated at left. The orbit of the Earth around the Sun forms a baseline whose length is the diameter of the orbit. The average distance of the Earth from the Sun is one Astronomical Unit (AU), equal to 150 million kilometers or 93 million miles. As the Earth orbits the Sun, relatively nearby stars will seem to shift back and forth with respect to more distant stars. This shift is called parallax. If the difference in the star's position as seen from the Sun as compared to the Earth is 1 arc second (1/3600 degree), its distance is, by definition, 1 parsec. In reality, the nearest star (Proxima Centauri) has a parallax of 0.77233 arcsec, and is thus more than one parsec distant (1.2948 parsecs, to be exact). One parsec equals 3.261631 light years or 30,856,780,000,000 kilometers (19,173,510,000,000 miles).